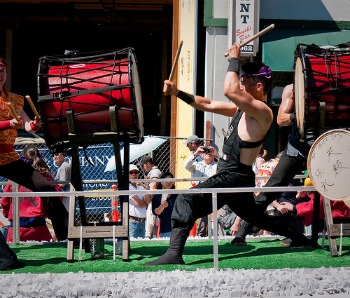 Even newcomers to San Francisco know that one of the main tourist attractions is the city’s Chinatown. However touristy long-time residents might consider it, San Francisco’s Chinatown holds the distinction of being both the oldest Chinatown in North America and the home of the largest Chinese community outside Asia. That’s nothing to sneeze at.

What if you want a more Asian experience than simply walking through Chinatown, buying a few trinkets, and stopping for lunch? That’s when you want to start looking at the calendar when you’re travel planning to see if your trip coincides with one of the many Asian festivals in San Francisco.

This year, in mid-September there’s an International Dragon Boat Festival in San Francisco. The festival draws more than 100 boats from all over the world, and it’s a competition that’s as beautiful to watch as it is challenging to do. This festival is about more than just the boat races, however – there’s also a selection of great food, arts and crafts to check out and even try, and music and dance performances. San Francisco’s annual Northern California Cherry Blossom Festival takes place when the cherry blossoms are in full bloom – during April – and is noted for bringing in several Taiko drum troupes in for performances.

For more Asian music, you might want to branch out from San Francisco to check out some of the other Asian festivals in California. Some other celebrations around the state include ShastaYama at Mount Shasta, the North American Taiko Conference in San Jose, and the Japanese-American Summer Festival in Concord.