Bay to Breakers: Only in San Francisco 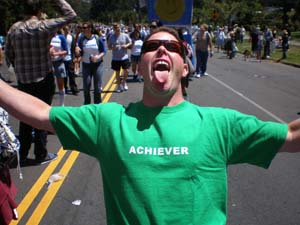 Held the third Sunday of May, the race was originally held in 1912 to help prepare the City for its first post-earthquake event: the Pan-Pacific International Expo. It is the longest consecutively running footrace in the world! The name Bay to Breakers signifies the course, which starts on the Bay side of San Francisco, and continues out to the Pacific Ocean, where you can find the breakers (waves). The first race was run with 200 registered racers, and now boasts a registration of around 70K (plus many, many more spectators who join in the fun).

Be warned, this race effectively shuts down the City, so make plans if you need to get from one side to the other. It starts near the Embarcadero with the tortilla toss. Yes, people throw tortillas in the air and at each other, which is quite a site. The starting gun goes off, and the elite runners start what will be their half-hour or so run…along with the running Elvii (group of Elvis impersonators) who try their best to keep up before stopping to grab a beer. At the same time, at the finish line, a group of “salmon” start to swim “upstream.”

Behind the elites starts some actual runners, as well as many floats, costumed folks, and themed groups. And, of course, the naked folks. The race takes is course down Mission, and eventually cuts over Market to Hayes Street, just in time for the Hayes Street Hill. This is the biggest hill in the race (and one of the only ones), and it’s a doozy. Many of the floats get abandoned at this point, as do many of the racers who have had a few too many in the wee morning hours. It makes its way down the panhandle, where the house parties really begin. If you’re lucky, you’ll see Elvis dancing on the roof, or grab a mai tai from the tiki bar float, or a jello shot from the fundraising contingent. The crowds definitely start to thin as you hit Golden Gate Park.

Golden Gate Park is really what separates the driven from the people who just need a nap. Your faithful loguer is one of the latter, having never made it out of the park (except the one time I actually joined the race IN the park). This is the first chance you might see some real bathrooms, too, so keep your eyes peeled. The rest of the course through the park is beautiful, so make sure to take a look at the scenery around you. And please, pick up your trash.

Before you know it you’re at Ocean Beach, marveling at the choppy waves that are pounding down on the sand. Go ahead and dip your toes in the cold Pacific, they deserve it after the walk they’ve taken. To get back to the downtown area, you have a few choices: Muni (take the 38 Geary or the 5 Fulton – both of which will be crowded but the party continues there); a cab (if you can find one); or walking back.

It truly is a fun time, and something I don’t think you can see anywhere else. Bring comfortable shoes, sunscreen (even if it’s foggy, you can get burned), a few layers of clothes, and an open mind. Leave your judgments at home, and enjoy the ride, just like the guy above!