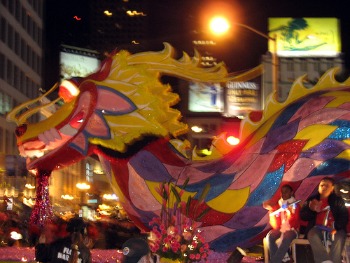 Chinese New Year is one of the biggest celebrations on the Chinese calendar, and for those who live in an area with a large Chinese population, it’s a fun way to enjoy another culture’s festivities. Of course, if you don’t live near a large Chinese population, you can still celebration the holiday in another city. One of the best US places to go for Chinese New Year is San Francisco.

This year, Chinese New Year falls on February 3, so there’s still time to plan a trip to San Francisco to celebrate, especially as the city’s Chinatown celebrates for several days, not just one. San Francisco’s Chinese New Year parade start during the Gold Rush in the 1860s, and is one of the oldest in the US.  The main event is the famous parade, with vibrant;y decorated floats,  festive firecrackers, Chinese acrobats, and the “Golden Dragon” at the end of the parade.

Cheap San Francisco hotels can be hard to find most of the year, but February is off season so you may be able to find some deals to San Francisco that offer lower rates on airfare or accommodations. It’s also wise to look at hotels just outside of the city – though you’ll have a longer commute, the savings could be worth it in the end. And don’t forget to check flight to Oakland as well. A short drive from San Francisco, the airport is often a cheaper gateway to the City by the Bay.