Off to Burning Man: Fly or Drive? 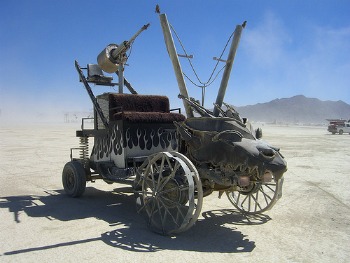 Last year, we talked briefly about the idea of adding a San Francisco side-trip into your travel plans for Burning Man – if you’re going to Burning Man from anywhere outside the southwest region of the US, it makes sense to pack in as much as you can, right? This year, we’re focusing on the other end of the spectrum – making the trip to Burning Man if you live in or around San Francisco.

There are several airports around San Francisco that, depending where people are flying from, could be good options in order to begin a trip to Burning Man. From each airport, it’s a few hundred miles’ worth of driving to get into the desert – but that can be part of the fun. If you already live in the Bay Area, however, you might be less interested in a road trip through terrain you get to see on a regular basis. In that case, you’ll be pleased to know that flying into Reno will get you closer to the actual Burning Man site.

From the airports in Oakland, San Jose, and San Francisco, you can hop on a short non-stop flight into Reno-Tahoe Airport (there are several each day), and that cuts your driving distance by more than half. The drive from Reno’s airport to Burning Man is roughly 130 miles, so you still need to be sure to look up details on how to get to Burning Man once you pick up your rental car.

One drawback to flying to Reno and then driving is that it’s more difficult to carry gear for any camping trip – which is stuff you’ll need once you’re at Burning Man. You can always get what you need in the Reno area, or buddy up with other Burning Man folk to share resources on-site.

The bottom line is that it’s likely to be cheaper and easier overall if you drive straight from the Bay Area to Burning Man – but if you’ve got frequent flyer miles burning a hole in your pocket or you don’t have a car, then flying to Reno and renting a car there is another option to consider.