Run a Marathon in San Francisco 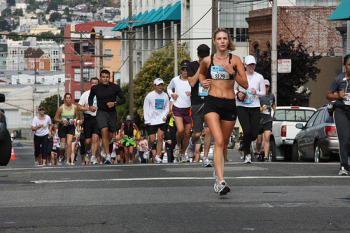 For marathoners and dedicated fitness fanatics, a vacation isn’t all about laying on the beach, eating and drinking your weight in pina coladas and tasty local food. For many, a visit to a foreign place is an excuse to take their workout to another place, exploring the destination while running, or trying a local workout. In San Francisco, one option is to run a destination marathon, half-marathon, 10k or 5k race.

One of the most popular races in the area is the Nike Women’s marathon, held every year in October, when the weather is cooler – usually between the mid 50s and low 70 degrees Fahrenheit. The race sells out every year though, so entry is awarded via a random drawing contest, which is usually open for a week in April.  The race course allows runners to see some of the best sights of San Francisco and the bay: Fisherman’s Wharf, the Golden Gate Bridges, and Golden Gate Park.

Whether you want to run in the marathon or just cheer on a fit friend, October is a great time of year to visit San Francisco. It’s easy to find cheap flights to San Francisco around this time, as it’s shoulder season and demand is lower. Cheap San Francisco hotels are pretty easy to find in October as well – though if you are planning on coming for the marathon it’s wise to book early. Many hotels sell out during the marathon weekend.