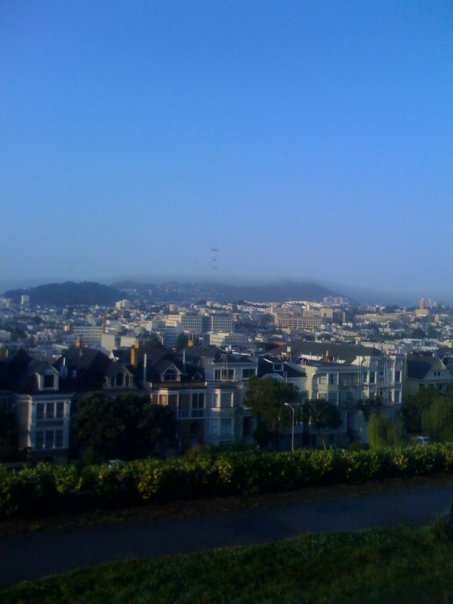 Hidden behind the fog of this picture is San Francisco’s Twin Peaks, a true high point of the City.

Twin Peaks rises in the middle of the City, above the Castro, Noe Valley, and its namesake area. From afar, there seems to be a huge tower on the Peaks — Sutro Tower — an antenna built for television reception in the early 70s. (which, the tower itself is a useful landmark, as it is a dominant figure in our skyline.) This is not actually on Twin Peaks, but right nearby.

Twin Peaks itself offers one of the most stunning views you’ll ever see. On a clear day, and yes, we have a few here, you can see from the Golden Gate Bridge down past the Bay Bridge; the view of the San Mateo Bridge is only blocked by the hills of southern San Francisco. The City lays before you in all its splendor; you can see the intricate layouts of the streets, the various neighborhoods, and, if your eye is keen, you can usually see wherever you’re staying! At night, the City comes alive with lights and zooming cars, and the view is equally impressive.

Foggy days mar the view a bit, but it is a cool place to sit and watch the fog roll in. Make sure to dress warm; the wind and the fog will really get you if you’re not careful. There is nothing quite like watching the fingers of fog come to wrap themselves around each hill and valley of San Francisco. It is quite marvelous.

Getting there may be a bit of a challenge, as there is no direct public transportation. If you are renting a car, or know a local with one, follow Market St. from downtown and go west. Continue to follow Market up the hill, and turn left onto Twin Peaks at the top. Then just follow Twin Peaks road to the parking lot at the top. From the Haight (to get to the Haight from downtown, there are several lines, in particular, the 7 Haight), take the 37 Corbett, which will take you to a little path that will take you up the hill. Just ask the driver for directions.