Should you visit San Francisco in winter? Why, yes. 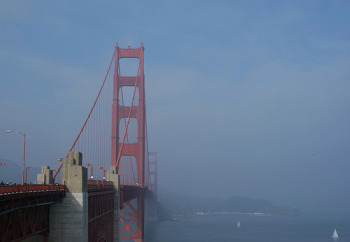 At this time of year, there are many people in the northern hemisphere who dream of a vacation to a sunnier climate every time they look out their window or step outside – and who can blame them? But although a trip to Mexico or Hawaii or even southern California sounds awfully appealing right now, there are still good reasons to consider a trip to San Francisco instead.

There’s no denying that the summer weather in San Francisco isn’t always warm and sunny (the last time I was there I needed a coat and scarf – in July), so saving a visit to San Francisco for the summer months isn’t necessarily as important to do as it is in places with bigger fluctuations between winter and summer temperatures. If your primary reasons for going are all outdoors, then you might want to wait for August – but if you’re planning to check out the many excellent museums, shops, and restaurants in the city instead, then there’s no better time to go than now.

For one thing, flights to SFO are cheaper in the fall and winter. The only problem with flying into the city’s biggest airport is that the notorious fog can cause delays year-round. To avoid this, I’d recommend looking at flights to nearby Oakland airport instead. The prices are sometimes better, but if they’re comparable you at least have the benefit of knowing you’re not as likely to get stuck in a fog delay.

And if the airfare looks inexpensive, then you’ll be even happier with all the cheap San Francisco hotels. The deals on hotel rooms at this time of year are abundant, and we’re not just talking about marginal hotels in parts of town where you don’t want to be. We’re talking about high-end hotels offering low-season discounts that are even lower than usual. Given the potential for bad weather, you shouldn’t count on getting a view of anything – but as long as the location is good, you probably won’t mind.

San Francisco’s famous restaurants, galleries, museums, shops, and other attractions can be busy during the high season, but chances are you won’t have to wait in long lines or wait hours for a table if you’re visiting during the winter. It’s a great way to get into all those places you’ve been dreaming about without having to book months in advance.

Here’s the thing – you can’t go look at the weather forecast for San Francisco right now, or you might be put off the idea of going. You’ve got to book the trip first, and then figure out how you’ll spend your time (likely indoors). Because yes, you’re right, San Francisco in the winter isn’t exactly the stuff of dreams. But if you’d like a quick reminder of how bad winter can really get, then hop on a flight from SFO to ORD in Chicago. That ought to make you appreciate San Francisco’s weather, hmm?