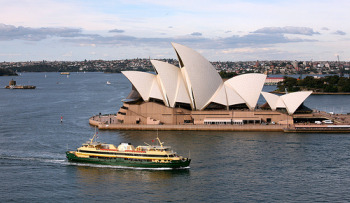 Although air travel really has shrunk the world in many ways, the sad fact remains that some places are easier to get to than others from where you happen to call home. Every time I see cheap flights to Europe from New York area airports, I’m envious of my friends who live in the Big Apple. Conversely, I’m sure they occasionally feel pangs of jealousy when they notice how many cheap flights to Hawaii depart from the West Coast. But I think both my East Coast friends and I can agree – finding cheap flights to Australia is tough from either side of the United States.

Despite the fact that airfare to Australia tends to be high from pretty much everywhere in North America, it’s often true that flights are cheaper from California’s airports – including the airports in and around San Francisco. And by doing a little research and being willing to visit Australia in the off-season, you can sometimes find great deals on flights into Melbourne and Sydney.

One way to find cheap airfare to a country is to check with the national carrier for that country. Qantas is the national flag carrier for Australia, and as a result you might find more flights in and out of its Sydney hub than you would on other airlines. More flight options don’t always mean cheaper prices, but it can – especially if you’re flying in the off-season. So be sure to check for Qantas deals when you’re researching airfare to Australia.

Since it’s on the other side of the world, Australia’s seasons are directly opposite from the seasons in the United States. In other words, traveling in the off-season means something different than usual. Australia’s off-season is typically its winter, which is our summer. Many parts of Australia will be cold during their winter, but some places stay temperate year-round – so planning an Australia trip during your summer doesn’t necessarily mean you’ll miss out on nice weather entirely. And if the airfare is half the price of a trip planned during your winter – their summer – that’s probably appealing enough to make it worth considering.

No matter when you decide to plan your trip, our inner travel gadget freak would be remiss if we didn’t tell you about the many iPhone apps for travel to Australia that we’ve found. Our favorites are the ones related to Australian slang (which you can have loads of fun with whether you’re traveling to Australia or not, in fact), but there are so many great apps that will make your Australia trip easier.