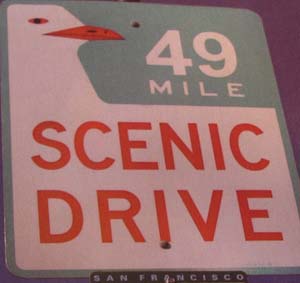 Did you know San Francisco is 49 square miles? Yup, that’s it. Our fantastic city is just 7 miles by 7 miles.

While I don’t usually recommend renting a car here, if you happen to have one, The 49-mile drive is one of the best ways to get an overview of the City. Be aware that you will be going through some dense urban streets, so make sure to pay attention to the road ahead of you while you’re driving (it’s easy to get caught up in the scenery).

The drive starts at City Hall, which is at Hayes and Van Ness, though you can join the drive anywhere along the route. There you’ll see a blue and white sign with a seagull. This drive will take you through the neighborhoods around San Francisco, giving you a nice context through which to further explore the City. It is a concentrated trip around the world: you’ll go through Chinatown, the first, and one of the largest, in North America; over to North Beach, where you can still hear Italian spoken as you walk down the streets; to Mission, with it’s Latin American-inspired murals and restaurants; to the Russian-heavy Richmond. In between, you’ll see some of the famous San Francisco landmarks, including the Golden Gate Bridge, Alcatraz, Coit Tower, and Twin Peaks.

Once you’ve gotten a taste of the various neighborhoods, make a note to go back and explore. And, don’t feel bad if you get off track a bit; it happens to the best of us.